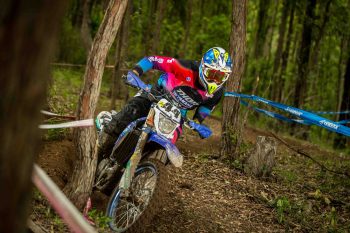 The Dungog round of the Australian Off Road Championships (AORC) allowed many of the Yamaha supported riders and teams to consolidate their positions in their class championships.
Constant rain on Saturday night meant Sunday’s racing was cancelled as swollen creeks and rivers left the course unrideable, but three rounds into the national championship and the bLU cRU are looking good.

To watch the video review of the weekend: https://www.youtube.com/watch?v=C2VSlSp0osU&feature=youtu.be

Michael Driscoll had a breakout ride on board his 450, charging to a second place finish in class (E2) and posting some impressive times in special tests. Driscoll not only ran second in class but also had special test times that were top two outright in a weekend that should see his confidence sky-rocket.

His only issue of the weekend was that racing was called off on Sunday and he was unable to piece together a complete weekend. He now holds down fourth in class, but just two points from second place in a very competitive class.

His teammate, Blake Hollis, charge to a round victory in the EJ (under 19) division. Hollis wasn’t at his best at the opening rounds as nerves got the better of him, but was but on top of things for round three and the victory saw him mov to the top of the table in the EJ class.

In the Women’s, it was again Jess Gardiner flexing her muscle and taking the round win. Not without some challenges from her rivals, Gardiner was able to steady the ship during the day and take the class win and keep her win streak going for 2020 with three wins from the opening three rounds.

Directly behind her was Yamaha stablemate, Emelie Karlsson. Karlsson was impressive over the weekend and claimed second place, moving her to second in the Women’s championship.

In the junior girls, Danielle McDonald and her all conquering YZ85 made it three from three after another successful weekend in Dungog. She leads the Junior Girls class by nine points over her nearest rival.

Young gun Kyron Bacon put up another strong performance in the E1 class, finishing third on the weekend. With Luke Styke leading the way in the E1 category and Bacon sitting third, Yamaha has a strong presence in the class and Bacon continues to improve at each and every round.

In the E2 (450cc) there is plenty of Yamaha riders flying the flag. Josh Green and Michael Driscoll headline the effort and are both in podium positions but are ably supported by Jeremy Carpentier who finished fifth at Dungog.

Stefan Granquist had an off weekend but still managed to steer his WR450F home to a ninth place finish in class.

In the Masters’ class, it was Kirk Hutton who again led the way and took another round win.

“It was another good weekend for Yamaha riders at the AORC,” commented AJ Roberts. “We have a wide variety of riders but all of them work hard and are determined to race well and present a professional appearance for Yamaha.

“After three rounds, many of them are on or near the podium positions in class and are keen to improve as the year wears on.”