Husqvarna debut a ‘good weekend’ for Wilksch in Dungog 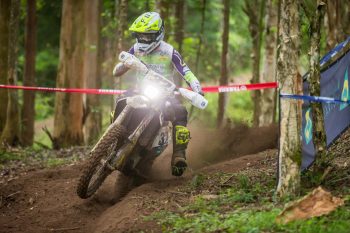 Husqvarna Enduro Racing Team newcomer Andy Wilksch has described his first appearance with the squad as a ‘good weekend’ at Dungog’s third round of the Yamaha Australian Off-Road Championship (AORC), the E2 contender recently recovering from multiple injuries.

Wilksch, who missed Toowoomba’s opener after suffering back and pelvis injuries in the pre-season, charged to a respective seventh during Saturday’s third round in E2, winding up 12th in the outright times.

The number 32 is pleased with his performance considering the lack of bike time this year, and admits his fitness surprised him after the challenging day’s racing.

“My only goal when I got injured was to be back for Dungog, which I’m really happy about and it was good to be there with the Husqvarna Enduro Racing Team getting that experience together,” Wilksch explained.

“To finish and get the result that we did was a bonus, really. I felt as though my body held up okay, surprisingly well actually, and my times were inside the top 10 outright in a fair few of the tests. It was definitely a good weekend considering the lack of bike time that I’ve had so far this year.”

Sunday’s fourth round of AORC was cancelled due to poor weather conditions. The next stop of the series is pencilled in for 18-19 April in Nowra, New South Wales, however it’s currently under review by Motorcycling Australia amid the coronavirus outbreak.