Green climbs to second in E2 standings at round three

Yamaha pilot winds up in P3 at the third round. 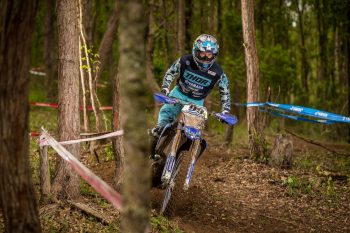 A third place result at round three of the 2020 Australian Off-Road Championship (AORC) in Dungog has promoted Josh Green to second in the E2 standings.

With Sunday’s fourth round cancelled due to poor weather conditions, the New South Welshman was able to make up a position in the highly-competitive category.

“It was a bit of an up and down weekend for me with some good test times but also a couple of ordinary ones that hurt me at the end of the day,” Green explained. “I think there were a few top three times in tests but there was also some way down in the top 10 when I fell off.

“No rider can afford to be inconsistent in a championship as competitive as this. Still, despite the mistakes, it’s still good to be on the podium and leave here healthy. I’m second in the championship but only two points separates three riders and we still have a lot of racing to go.”

The next stop of AORC, currently under review by Motorcycling Australia amid the coronavirus, is scheduled for 18-19 April at Nowra in New South Wales.