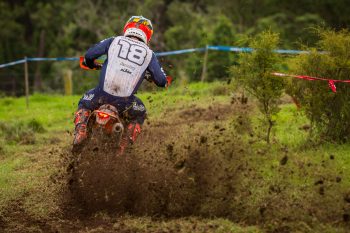 Dungog’s third round of the 2020 Yamaha Australian Off-Road Championship (AORC) saw Mason Semmens take on the Enduro format for the first, which was admittedly a learning experience for the E1 rookie.

“The enduro format was new to me, so I learned a lot on the trail and with the tests in between, which was good,” said Semmens. My day wasn’t too bad, finishing second in class, even though we always want to win.

“I look forward to doing some more enduro and really picking it up further, plus Dungog was a good location to gain further experience. It would have been nice to race on the Sunday, but it is what it is and we’ll move onto the next one now.”

Sunday’s fourth round of AORC was cancelled after poor weather conditions continued to hit the New South Wales venue. The next stop of AORC is scheduled for 18-19 April in Nowra, New South Wales.