It was another impressive hitout for KTM Enduro Racing Team’s Daniel Milner at Dungog’s third round of the 2020 Yamaha Australian Off-Road Championship (AORC), the reigning E2 champion claiming victory in class while topping the outright times. 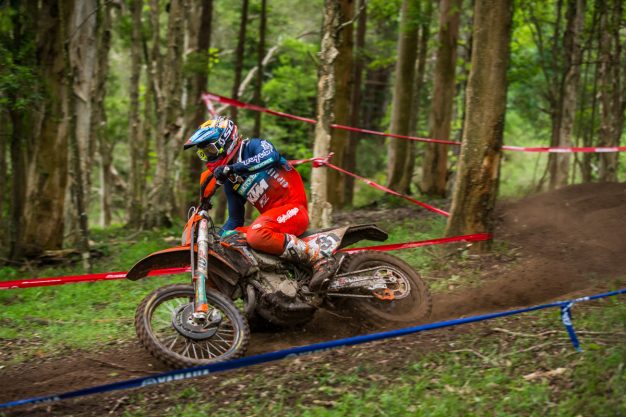 Dungog was another good result for you, how did it all unfold?

Yeah, it was good hey. I always love the enduro format – it’s just something I seem to gel with – going into the test and then daydreaming through the trail section pretty much [laughs]. I’m able to flick the switch going into the next test and go hard. It’s definitely something I enjoy doing, and my results were pretty much perfect – I think I won every test outright and also in class. I didn’t really make mistakes and just had a flawless day. I didn’t put the bars to the ground or anything – I just had a consistent day and made sure I got through cleanly.

How were the conditions? It looked like the rain started to play a factor towards the end of Saturday…

Yeah, it was pretty crazy. The test down on the property we parc ferme was, it was dry and good. And then, out on the trail, we went up into the hills – we climbed maybe 100 or 200 metres – and it was just pissing down up there. There was honestly so much water and mud in the track, it was pretty crazy. We got a little bit of rain on the track which made it slick on the special test, but the trail was gnarly and I definitely understand why they shut the enduro down. The plan was to sprints today, but unfortunately, they said it was too wet for that. If it was in Victoria, it probably would’ve been a different decision, but I guess they’re trying to look after the property and not wreck it too much. I can see both sides to it, but for me, it was a bit of a bummer that we couldn’t go racing today as I feel strong on the bike and fit, and good to go. It would’ve been nice to have another day’s racing, but it is what it is. For sure! I’m just in a good headspace, and I think that’s what kind of helps. Having Mason [Semmens] as my teammate – we get on good and we go training together – we’re always having a good time. I’m just enjoying it again. The bike is unbelievable, we did a bit of engine work to it going into this round and played around with it, and honestly, the bike is the best I package I’ve had so far. I’m really enjoying the bike and the environment – having Scotty Keegan as team manager – we came up early last week and did a bit of testing and mountain biking. I’m just enjoying it a lot more, which shows in the results.