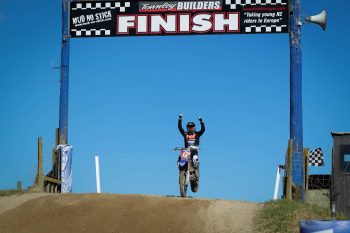 Kirk Gibbs has claimed a second-career MX1 title in the New Zealand Motocross Championship after finishing runner-up at the final round in Taupo over the weekend.

The JCR Altherm Yamaha rider defeated defending champion and round winner Cody Cooper (Honda Racing) by a slender four points in the title chase, the Australian securing 50 percent of race wins from 12 starts.

“It’s so awesome to win the championship again,” said Gibbs, who also claimed the title in 2018. “To come so close last year and just miss out was disappointing. Everything just went really well for me this season and things started clicking for me.

“I was riding well and the Yamaha YZ450 was great. Working hard with Josh during the weeks between the four rounds and with my Australian team helped me to feel really comfortable and strong, which was what I believe led to the championship win.”

The MX2 title was taken out by fellow JCR Altherm Yamaha rider Max Purvis, while Australian Caleb Ward (CML KTM) was fifth in the standings.