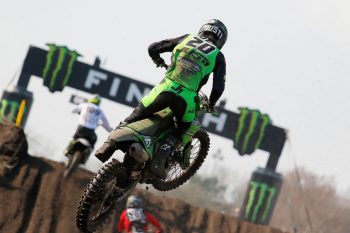 A first turn pile-up at the MXGP of the Netherlands on Sunday has resulted in a hand injury for Australian Wilson Todd, which will force him to sit on the sidelines in the coming weeks.

The DRT Kawasaki rider, who overcame a mechanical issue in Saturday’s qualification race, was involved in a multi-rider incident at the opening turn, suffering multiple broken fingers in his right hand.

It’s not yet clear how long Todd will be sidelined for, however it’s likely he’ll at least miss the next stop of the MX2 World Championship in Argentina on 22 March.

“Not so great weekend for me,” Todd stated. “Bike trouble in qualifying gave me last gate pick today, [then I] joined in on the first turn pile up and [was] ran over. Some broken fingers and cuts – we will be back.”

The injury comes as a bitter blow for the two-time Australian champion in his rookie season on the world stage.