Dutch GP ‘one of the most difficult Valkenswaard wins’ declares Herlings 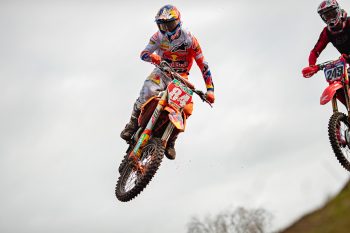 Jeffrey Herlings says the weekend’s Dutch MXGP was one of the most difficult wins of his career at the Valkenswaard venue after being challenged by reigning world champion Tim Gajser (Team HRC) all weekend.

The Red Bull KTM Factory Racing contender, who’s been notoriously dominant in the sand especially in his home country, mustered up a 2-1 scorecard to be credited the overall on countback, benefiting from an error by Gajser in the final outing to stand atop the podium.

“This was one of the most difficult Valkenswaard wins,” Herlings declared. “Tim did a great job but it was important for us to think about the overall than the 1-1 and to not lose points.

“This was a good GP for us. Going to Argentina I hope we can find some good weather – it has been two in a row now with rain! We’ll try to make the best of the situation there and go again for a podium spot.”

Herlings holds a nine-point advantage over Gajser as the MXGP World Championship heads to Argentina on 22 March.