Career-best WMX moto finish for O’Hare in the Netherlands

KTM-mounted Australian 11th overall at the second round. 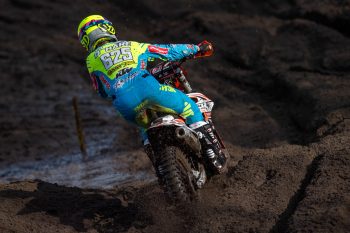 Western Australian TJ O’Hare stormed to a top 10 moto result at Valkenswaard’s second round of the 2020 Women’s Motocross World Championship last weekend, marking a career-best performance so far on the world stage.

Following a 12th overall placing at Matterley Basin’s season-opener a week ago, the KTM Diga Junior Racing rider strengthened her championship ranking by racing to a 15-8 scorecard for 11th overall at the Dutch venue.

The result moves O’Hare to 10th in the series standings, which is currently led by reigning champion and New Zealander Courtney Duncan (Kawasaki).

“I was a bit too stressed on Saturday I think,” O’Hare stated. “Halfway through the race I calmed myself down because I made some many mistakes but things improved from there. After they flattened the track it was much easier to keep the speed today.

“I’m pumped about that eighth place in the second race moto, my best world championship result ever. For the moment I’m quite pleased with my speed I just need to build more consistency into my riding to eliminate the mistakes. If I can achieve that, even the top six would be within reach.”

Compatriot Hannah Bagnall (Honda) contested her second-ever round in the WMX class at the weekend, winding 38th overall.