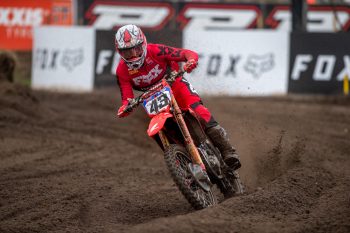 Australian Mitch Evans will undergo further medical examination this week after injuring his shoulder in a multi-rider incident at Valkenswaard’s second stop of the 2020 MXGP World Championship.

The Team HRC contender was landed on during lap one of the opening moto, dislocating his shoulder while ruling him out of the weekend.

The extent of the damage is unclear at this stage, however Evans is hopeful it won’t sideline him for an extended period of time.

“Really disappointed to be leaving here with my arm in a sling, without even managing to complete a lap,” Evans explained. “I got landed on by another rider in the downhill, which then sent me into a third rider and then I was thrown off the bike.

“I’ve never dislocated my shoulder before so it was quite painful but we got it put back in and now I have to have an MRI just to see exactly what damage there is. I’m hoping it won’t be too serious though and I’ll be back riding soon, and I’m already looking forward to getting back out there.”

The next stop on the MXGP World Championship schedule is pencilled in for 22 March at Neuquen in Argentina – the venue where Evans scored his first-ever grand prix podium in the MX2 category last year.