Marchbanks breaks through for Kawasaki double in 250SX East final. 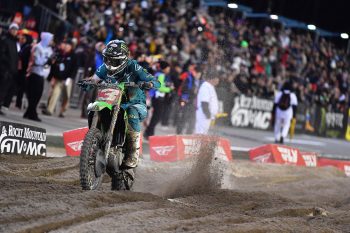 Tomac and Ken Roczen (Team Honda HRC) were tied in points entering round 10 of the season, the pair separated by only 0.707s as the checkered flag flew.

Roczen led from the opening lap all the way through to the closing minutes when he made a minor error, when a late effort from Monster Energy Kawasaki-mounted Tomac saw him finally make his way to the front from as far back as fifth on lap one.

The final appearance of Chad Reed (Mountain Motorsports cbdMD CR22 Racing Honda) saw him ride to 13th position, matching his best result of the season from Arlington two races ago.

The 2020 season will now move on to Indianapolis for round 11 of 17 next Saturday night, with Tomac leading by three points over Roczen in the premier class standings. 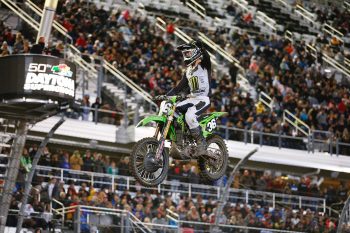 A first-career victory was earned by Garrett Marchbanks in 250SX East at Daytona.

At the top of the point-standings remains Sexton, extending his advantage to 10 points over McElrath entering Indianapolis next Saturday, 14 March.