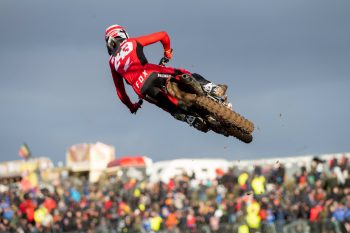 Defending champion Tim Gajser admits Valkenswaard isn’t a favoured track of his as the MXGP World Championship visits the Dutch venue this weekend for round two.

The Team HRC rider revealed he travelled directly to the Netherlands after claiming second in Great Britain last weekend, however a lack of practice tracks has forced him to travel to Germany in order ride ahead of Saturday and Sunday’s event.

“I’m happy with my speed, with my fitness and with how the new CRF450RW performed so I’m really looking forward to going racing in Valkenswaard,” Gajser explained. “It’s not my favourite track, but I’ve had some good results there in the past so hopefully I can repeat those and enjoy my races.

“This week, I came straight to the Netherlands from England but we have struggled to find any good tracks that are open to practice on, so I will go to Germany to train one day, just to make sure we are ready for the weekend.”