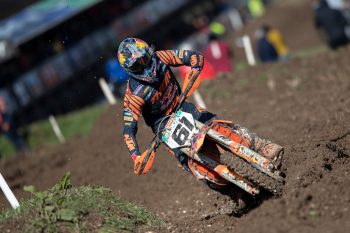 Prado only returned to riding two week’s prior to the British grand prix, prompting the teenager to have low expectations for the beginning of his rookie season.

The 19-year-old managed to put together a respectable scorecard in demanding conditions, racing to 9-13 moto results for 10th overall.

“I’m a world champion so finishing 10th is not something I am used to – the last two years have been really good,” Prado explained. “But if I look at it the other way and after just two weeks of riding then I have to feel very happy about today.

“I didn’t have any pain and I have been working hard – this was the best I could do. I would say that last 6-7 minutes and two laps of the second moto were quite hard. The track was super-rough and I was pretty tired.

“I did not want to crash, and the sun was very low. First race of the season, first race with the 450 and the last time I raced was in Assen – what a weekend.”