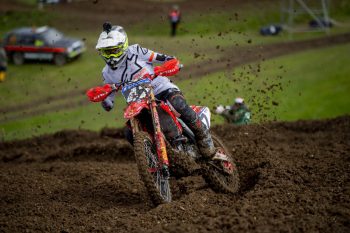 MX2 World Championship rookie Bailey Malkiewicz endured a challenging debut at Matterley Basin’s MXGP of Great Britain, the Australian nursing a knee injury that he sustained in the pre-season.

The 18-year-old qualified 22nd before racing to 38-29 moto scores in demanding conditions, crediting him 32nd overall in his first appearance in the series.

Honda Europe Off-Road Manager Gordon Crockard spoke of the former junior world champion’s weekend, hailing him for pushing through the adversity in what was a trying start to his campaign.

“I think next weekend will bring a great sense of relief when we hopefully return to more normal racing conditions,” said Crockard. “Our new starters in MX2 – Nathan Crawford and Bailey Malkiewicz – did well as they’ve not competed in the MX2 class previously.

“So I think they did really well under the circumstances and the reduced track time due to the weather. They had a lot to consume and a lot to learn in a very short space of time. Bailey is carrying some injuries, so hats-off to him for persevering with all that he was up against.”

The MXGP World Championship will be staged in the sands of Valkenswaard this weekend in the Netherlands.