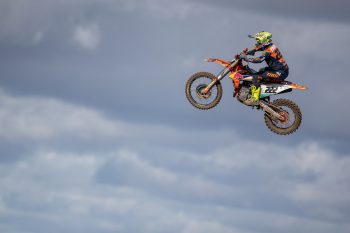 Multi-time world champion Antonio Cairoli has revealed information on a knee injury he dealt with at the British grand prix, the Italian favourite admitting he thought his season was over before it started.

The Red Bull KTM Factory Racing entry confirmed he twisted his knee in the lead up the Matterley Basin’s MXGP World Championship opener, which scans determined was a second-degree PCL tear.

Despite the setback, Cairoli pushed through the injury in highly-challenging conditions to notch up a 4-3 scorecard for third overall.

“It is nice to be back on the podium after so many months without racing,” Cairoli commented. “My shoulder has improved a lot in recent weeks but last week in Belgium I twisted my right knee and heard a crack. I thought ‘the season is finished already’.

“I went to the doctor and he confirmed a second-degree PCL tear. I taped the knee very hard yesterday and today and all the ruts out there were not helping. I just need to work as much as possible on the muscle to make it as stable as possible.

“So to be on the podium at this track and these conditions is amazing and I’m motivated again to work really hard and try to build it up. We will see what we can do next.”

The 34-year-old missed majority of last season after damaging his shoulder in July 2019.