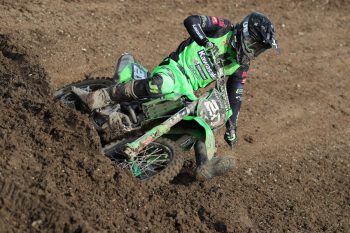 It was a top 20 performance for two-time Australian champion Wilson Todd in his MX2 World Championship debut at the MXGP of Great Britain last weekend.

The DRT Kawasaki entry admittedly struggled at the beginning of the round, citing a lack of bike time, while he managed to find a more competitive pace for the final encounter, where he wound up 13th for 17th overall.

The Queenslander, who only returned to riding in December after suffering a fractured vertebra in supercross last year, believes it’s a starting point for his rookie season on the world stage.

“Went to struggle town in [practice and qualifying], and race one with my lack of bike time,” Todd commented. “[It was] much better in race two – started around 20th and come up to 13th, but happy with the flow and fitness.

“[I] was reeling in the six guys in front of me the last couple laps – it’s a starting point and we shall get better with some bike time.”

The MXGP series will visit the Netherlands this weekend at the Valkenswaard venue.