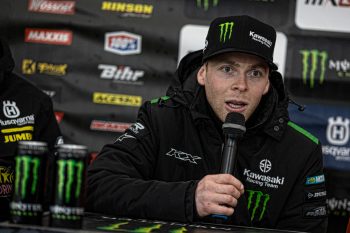 Former world champion Romain Febvre was absent from Sunday’s racing at Great Britain’s opening round of the 2020 MXGP series, the Frenchman opting out of the pair of motos as he deals with a knee injury.

It’s understood the Monster Energy Kawasaki Factory Racing newcomer tweaked his knee one week prior to Matterley Basin, however he attempted to compete across the weekend’s event, completing qualifying on Saturday in 24th position.

It’s another blow for Febvre, who recently returned to riding after sustaining a broken femur in the 2019 MXGP World Championship.

“Dealing with the injury is sometimes possible, but today it wasn’t,” Febvre said in a statement. “Hurt my knee nine days ago in practice, even without crashing – nothing is damaged but it’s painful. I did try because I want to give my all – [it’s] a tough moment with the consecutive injuries.”

It’s not yet clear if Febvre will line-up at Valkenswaard in the Netherlands this weekend.