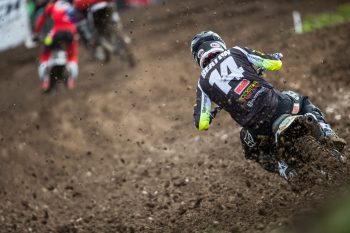 Rockstar Energy Husqvarna Factory Racing’s Jed Beaton admits he needs to be more patient moving forward in the MX2 World Championship after a moto two error ultimately cost him a podium finish in what was still a strong opening performance at Matterley Basin.

The Tasmanian was in fine form at the British venue, storming to runner-up honours in the opening encounter to set himself up for a respectable overall result.

Beaton, who missed much of the 2019 season with a number of injuries, washed his front-end while in podium contention during race two, rebounding to salvage sixth for fourth overall, missing out on the box by just three points.

“It was a good weekend for me,” Beaton stated. “Fourth overall is a great result for the first grand prix, although I’m a little disappointed to miss the podium because of a small crash in the second race.

“In the first moto I had a good start, found some nice lines and came from eighth to second, which was great. I felt good and, yeah, it was good to get that result in the books. Second moto, it took a while to settle into a rhythm and then I just washed the front wheel out in a corner, losing a few places and I finished the race in sixth.

“For the upcoming rounds I just need to be a little more patient. Overall, it’s been a great day and there are plenty of positives to take into round two next weekend.”