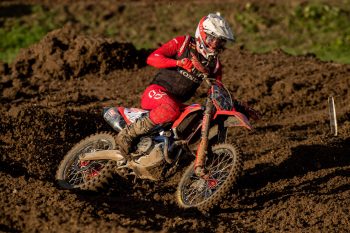 Australian Mitch Evans has revealed he battled an illness on his premier class debut in the 2020 MXGP World Championship at Matterley Basin, where he still managed to land a third in moto one.

The Team HRC newcomer admits he struggled with breathing due to a chest infection that hindered him over the weekend, while the second moto saw the number 43 forced to battle his way back from a less than stellar start.

He pressed on to cross the line in seventh, which paired with his opening podium, granted the Queenslander with fifth overall – just four points of shy of second’s Tim Gajser (Team HRC).

“It was a good weekend, excluding the start of that second moto,” Evans commented. “Everything else went really well. In the first race I had a good start, avoiding some of the early race carnage and made my way into second.

“Unfortunately, I struggled with my breathing a bit because of my chest infection and finished third. I felt a lot better in the second moto although I had to push throughout the race because of the bad start.

“I used a lot of energy to get around guys as fast as I could and I hit a bit of a wall with eight minutes to go. Overall it was a good weekend though, I’m happy with my MXGP debut and now I get ready for Valkenswaard next weekend.”

The MXGP World Championship heads to Valkenswaard this weekend in the Netherlands for round two of the 20-stop series.