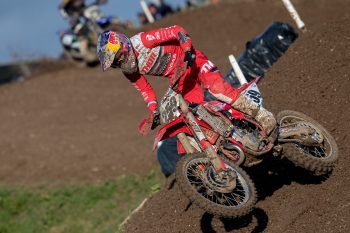 Glenn Coldenhoff has declared his top 10 finish at Britain’s opening round of the 2020 MXGP World Championship was a ‘very good start’, the weekend’s event marking his debut with the all-new GasGas MC 450F.

Coldenhoff charged to a pair of sixth-place finishes for eighth overall, the Dutchman proving to be highly-competitive after crossing the line just over 30 seconds behind the leaders in both outings.

The 29-year-old is adamant improved starts will enable him to challenge for wins and podiums, which he’s eager to rectify as the series heads to his home country, the Netherlands, next weekend at Valkenswaard.

“It was a solid weekend for me, two sixth-place finishes is a very good start to the championship,” Coldenhoff explained. “Qualifying yesterday wasn’t great, which didn’t give me the greatest gate pick for today’s races.

“But it was what is was and this morning in warm-up I felt great and posted the third fastest time. That gave me some confidence heading into the races. My first moto start wasn’t great, but I pulled through from around 10th to sixth, so it was good to get the championship started with a positive result.

“The second moto was very similar to the first. I felt good, felt like my speed was there and had some good battles. I know that if my starts are better I can fight with the guys that were ahead of me this weekend. I’m looking forward to the next GP, it’s one of my favourites and I hope to get some solid results there too.”