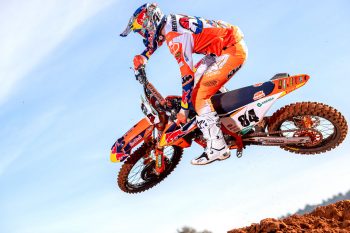 Hurlings, 25, was previously signed to remain with KTM until the end of this year, now confirming the pair will continue for an additional three years.

“I’m very, very happy,” the Dutchman commented. “I have been with KTM since 2009 so by the end of this next contract it will be 15 years together. I’m excited to stay in the orange family and I have been working with Pit [Beirer] and the entire crew since the beginning and I was 14.

“I’m blessed to be able to do it for another three years – four including this one about to start. It is also good to have this done before the weekend and GP1 of 2020. KTM is where my heart is and they are my family. I’m thankful that they trust in me and I believe in them, the bike and all the people I work with.”

KTM Motorsports director Pit Beirer added: “This contract definitely means a lot to me personally because it was back in 2009 that we gave this young kid and his family our word that we’d take good care of him and he had a great future in front of him – we wanted to be a partner in that.

“We went through so many ups and downs with Jeffrey and he has collected all of his wins and titles with us, just one brand. It was actually quite emotional to know he could spend his career with just one company. I’m really happy that we could agree everything so early for another three years and I wish him a healthy and strong season.”

The association began in 2009 when Herlings was signed to make his MX2 debut for the 2010 season as a 15-year old. He claimed his first top-three race finish in just his second moto at the Grand Prix of Bulgaria, celebrated his first podium at Mantova in Italy for round two and then went 1-1 at Valkenswaard.