Green relieved to make it through Toowoomba unscathed 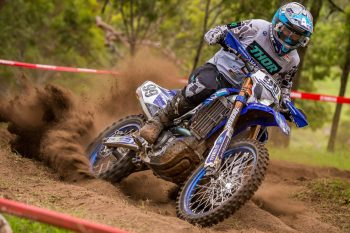 Green suffered a heavy fall in the lead-up to Toowoomba, and while he wouldn’t disclose the injuries he’s dealing with, he admits he was doubtful to make the weekend’s event just two weeks prior.

The New South Welshman scored a pair of third place finishes in the E2 class across both days, while he went 4-4 on Saturday and Sunday respectively in the outright times.

“Two weeks ago it was doubtful I would even be racing, so to not only be competing but also very competitive is a real bonus and I’m satisfied with the result from the weekend,” Green explained. “As each day went on, I could feel my strength draining but on Saturday night, I was able to freshen up and tackle Sunday feeling pretty good.

“The bike was good all weekend, the team worked hard behind the scenes to ensure I had everything I needed and the interest in off-road was as good as I have seen it so it’s awesome to see the promotion and energy in racing at the moment.

“We have a month until rounds three and four so hopefully I can continue to recover and hit them at 100 percent.But, glad to get through the weekend unscathed, land on the podium both days and get off to a good start in the 2020 championship,”

The AORC now heads to Dungog in New South Wales on 14-15 March.