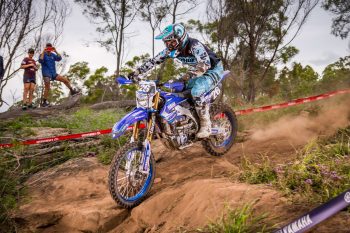 The Yamaha Active8 Yamalube Racing rider is understood to have suffered elbow and ankle injuries, the number 26 admitting he was in significant pain as he pushed through the remainder of the day to finish 14th outright and third in E2.

“Saturday was good and everything was on track, but I got it all wrong in a rocky area of the course and fell onto my elbow and also got my ankle stuck under the bike,” Styke explained. “And I’m not sure what hurts most. I will have to get them both checked out as the pain in both is pretty high.

“I managed to finish and actually got better as the day went on, but I was nowhere near 100 percent. Thankfully the team had my back and encouraged me to keep plugging away and salvage what I could after the crash. My first priority will be to get both my elbow and ankle checked out and make a plan after that.”

Styke won Saturday’s opening round in the E1 division, and paired with his third on Sunday, he’s ranked second in the standings behind round two winner Mason Semmens (KTM Enduro Racing Team). The AORC now heads to Dungog in New South Wales on 14-15 March.