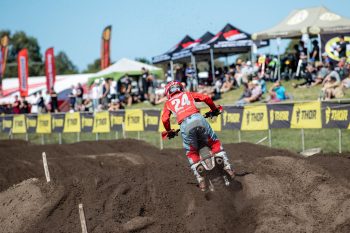 Williams made the announcement at the store’s all-new showroom at the Gold Coast on Saturday, where a special grand opening was hosted for the public.

MXstore’s move as naming rights sponsor comes after multiple years as a partner of the series, the company taking the position vacated by Pirelli.

“We’re delighted – the guys have been partnering with us over a number of years already,” Williams stated on the Inside Dirt podcast. “Clearly the market at the moment is tight, but you look here today, there are several hundred people at a time coming through.

“They’re investing heavily [in the sport], sponsoring the AORC and Motocross of Nations – they’re well committed and they’re connected to so many brands.

The 2020 MXstore MX Nationals will consist of nine rounds hosted over six weekends, with the season-opener scheduled for 4-5 April at Horsham in Victoria.