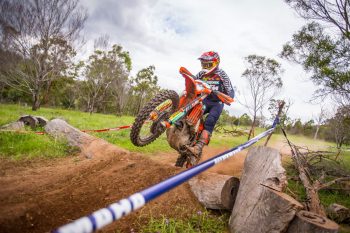 Semmens, who’s transitioned from racing motocross this season, was highly-impressive in his factory KTM debut, finishing Saturday’s round one second in the E1 category for sixth outright.

He went one better on Sunday to capitalise on an error of two-time champion Luke Styke (Yamaha Active8 Yamalube Racing) to secure victory in the class, while he was once again ranked sixth on the outright timesheets.

“To get 2-1 results and take the points-lead over the weekend in my first race with the KTM Enduro Racing Team is a really good feeling,” Semmens commented. “I wasn’t sure where I was going to be at coming into the first round, but the hard work that we did in the off-season showed and I surprised myself a little bit.

“I’m learning every time I go out and really tried to minimise mistakes, so it was good and I’m really fortunate to be teammates with Milner. Everything has been awesome and I’m definitely feeling comfortable on the KTM 250 SX-F.”

The youthful talent holds a two-point advantage over Styke as the series heads to Dungog in New South Wales on 14-15 March.