Factory Husqvarna rider set to don the number one plate this weekend. 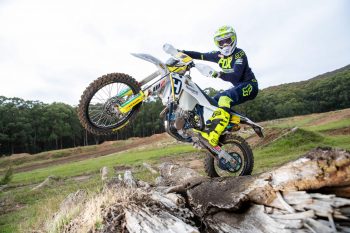 Sanders has worked with Grabham – who operates Grabbo’s Trail and Track away from his role with Husqvarna – as a riding coach in recent years, the former off-road great assisting him to the most successful season of his career in 2019.

“This year it’s good having Grabbo with what I’m doing in Australia,” Sanders explained to MotoOnline.com.au. “Especially with Finke – we’ll be off on our own there – but having him there for that, the AORC and A4DE, he’s probably the best secret weapon anyone can have.

“To have him there running the team, there’s no stress for me – I know everything’s going to be there every weekend and I don’t have to chase anything up myself.”

Sanders will don the number one plate when the Yamaha Australian Off-Road Championship launches this Saturday and Sunday at Toowoomba in Queensland.