Husqvarna program will see Queenslander take on double-duties in 2020. 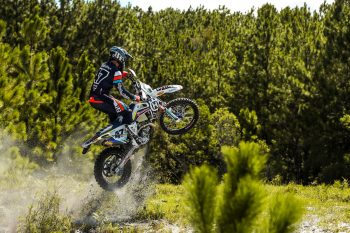 Reigning MX Nationals MX1 champion Todd Waters will pull double-duties in 2020 after confirming he will contest the entire Australian Off-Road Championship (AORC) in his own Husqvarna-supported program.

Waters, 29, will defend his motocross crown with direct Husqvarna backing following the collapse of title-winning team DPH Motorsports, adding the AORC and Hattah Desert Race to his schedule in a unique arrangement.

The transition of Waters to enduro comes after he lined up in last year’s Transmoto 6 Hour at Nabiac, luring him to an expanded off-road schedule. It’s understood that the reduction of the MX Nationals to six events also played a part in his decision.

It’s been no secret that Waters has been evaluating the opportunity to add the AORC to his roster for 2020 despite denying the speculation last month, finally confirming that he will be FE 450-mounted in the E2 category. Both his motocross and enduro programs appear to be heavily supported by Western Australian company Berry Sweet Strawberries.

“We are pleased to finally announce that I will be racing at all rounds of the 2020 Australian Off-Road Championship on a Husqvarna Motorcycles Australia-supported program,” Waters announced. “There has been a lot of speculation and gossip that this was going to happen – I did my best to make sure I didn’t let the cat out of the bag before it became official.

“I’m not one to shy away from challenges and having ticked off racing a few rounds of the Lucas Oil AMA Pro Motocross Championship series in 2019, I needed something extra to fill up the 2020 race calendar. When the calendars were released and finalised at the end of last year, I saw an opportunity to commit to the AORC.

“I am super-stoked to receive the backing of Husqvarna Motorcycles Australia to attempt this new venture and I will be competing in the E2 category on board a FE 450. I was given a FE 501 last year to race a Transmoto 6 Hour and fell in love with the thing! I grew up riding most days in the hills behind my parents’ property on the Atherton Tablelands, so the transition to off-road feels really natural.

“I’ve taken my brand new FE 450 out for a few rides and test days and it feels really comfortable and similar to my FC 450, so it’s been really refreshing to add in a new discipline. I’ve been having a ball getting out into the bush, popping off rocks, jumping into gullies and wheeling over tree roots. I’m excited for the first round of the AORC in Toowoomba.”

Waters’ confirmation comes just days out from the opening rounds of the 2020 AORC season to be held in Toowoomba, Queensland, on 22-23 February. His MX Nationals defence will commence at Horsham in Victoria on 4-5 April.