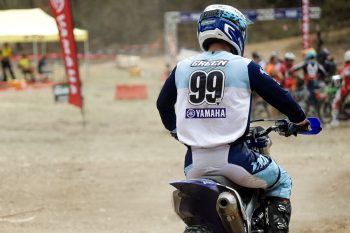 The New South Welshman clashed with a gumtree last month while riding, resulting in a concussion and a number of minor injuries. It forced the number 99 to be sidelined for numerous weeks before making a return to the bike over the weekend.

Green remains vague on the injuries he’s bouncing back from, although he’s adamant he feels good going into Queensland’s double-header this Saturday and Sunday.

“I’m definitely going to line-up on the weekend,” Green confirmed to MotoOnline.com.au. “Basically I just hit a gumtree – I don’t remember the crash because I had a concussion, and I had a few injuries here and there, but I’m not going to make a comment on that. It was just a few injuries, but nothing too serious, although it was enough to put me off the bike for a few weeks.

“I got back on the bike Sunday and had a ride, so I should be good. I feel good, I’m definitely sore, but I can actually ride, so that’s a win – it’s all good.”

The long-time Yamaha contender will continue to pilot the WR450F in the E2 category this season.