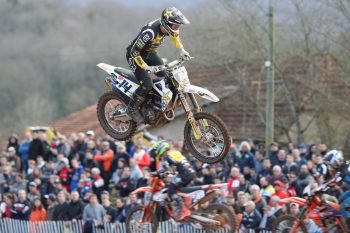 A runner-up result at the Mastercross Lacapelle Marival event in France has offered Jed Beaton a timely boost of confidence ahead of the 2020 MX2 World Championship.

The podium has put the Rockstar Energy Husqvarna Factory Racing entry in a positive frame of mind for Great Britain’s season-opener in two weeks’ time, the Australian bouncing back from an injury-riddled 2019.

“I’m pretty pleased with the way today went,” Beaton commented. “It’s really nice to get to race a pre-season event that’s not super wet and is in good condition and has good grip. The two motos went well enough for me. In the first race I didn’t get the best of starts, I think I was down in fifth or sixth before getting up to third.

“I stayed there for quite a few laps, before the top two guys got into the lappers. It got pretty intense there for a while and I was able to close up a lot. Third was a good result. I took a little while to get into a rhythm in the second race although I was in second for most of the time.

“I felt like I rode a lot better in the second half and to finish second overall is positive ahead of the first GP in a couple of weeks.”