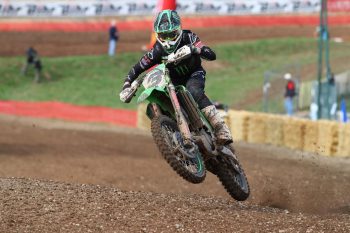 A podium result at the Mastercross Lacapelle Marival in France has reassured Romain Febvre as he plots a return to the MXGP World Championship after his 2019 campaign was shortened due to injury.

The Frenchman, who’s made the high-profile move to Monster Energy Kawasaki Factory Racing for 2020, broke his femur at the Uddevalla grand prix in August last year.

“It’s a great feeling to have such a strong day with good starts, good lap time and podium results,” said Febvre. “We have worked a lot with Jacky [Vimond] and I have made a lot of progress since Riola three weeks ago.

“I love my KX450-SR and we saw today that I got good starts even if this one here is really short to the first turn. I can say that tonight I am reassured – now we’ll go back home and practice on several different tracks to be ready for Matterley Basin.”

The opening round of the MXGP World Championship is scheduled for 1 March at Matterley Basin in Great Britain.