South Australian relocates to Victoria ahead of debut season. 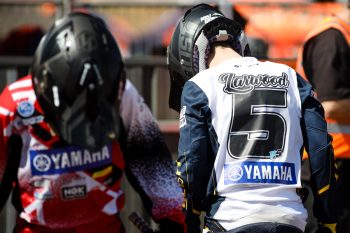 WBR Yamaha newcomer Alex Larwood has relocated to Victoria to work under the guidance of renowned rider coach Ross Beaton ahead of his rookie MXD campaign in the MX Nationals.

South Australian Larwood, who made a surprise pro debut at last year’s AUS-X Open Melbourne, is taking advantage of his highly-experienced training partners in the lead up to round one, where he hopes to immediately establish himself as a championship favourite.

“I’m actually down at Ross Beaton’s in Victoria,” Larwood told MotoOnline.com.au. “I’ve worked on and off with him for the last couple of years, and there’s no point in me being in South Australia because I don’t really have anyone to ride with. Ross always has a bunch of guys here, so it’s better to be down here in Victoria with Ross.

“I’m riding with guys like Kyle Webster, Daniel Milner and Campbell Williams, and just a bunch of other good guys that ride on the daily with him. It’s pretty good – I can gauge myself off Webster and Milner – even though he does enduro, he’s still bloody fast at motocross. I can chase them around the track and with Ross on the pit board, I can really improve.”

The opening round of the MX Nationals is scheduled for 4-5 April at Horsham in Victoria.