Starts a downfall for Gibbs in New Zealand nationals opener 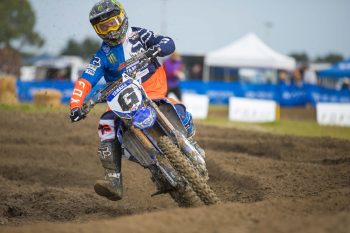 Former champion Kirk Gibbs has acknowledged his starts let him down at the weekend’s opening round of the 2020 New Zealand Motocross Championship in Balclutha, although the South Australian was still able to exit the round with a P2 result.

Admitting he’s extremely disappointed with the overall placing, Gibbs expressed a great desire to capture victory in his bid to add another New Zealand motocross crown to his list of accolades.

The Altherm JCR Yamaha rider recorded a 2-2-3 scorecard to finish second behind a dominant Cody Cooper (Honda Racing), while it was Hamish Harwood (CML Motorex KTM) who locked out the podium.

“My starts let me down all weekend which I’m very disappointed about,” Gibbs declared. “It doesn’t look that bad on paper but I’m extremely disappointed with the end result.

“I wanted to go in there and have a win. I’ll come out swinging in Rotorua because I don’t want to let Cody get too far ahead or it will blow out with it being such a short series.”

The championship heads to Rotorua on 23 February for round two of the four-stop series.