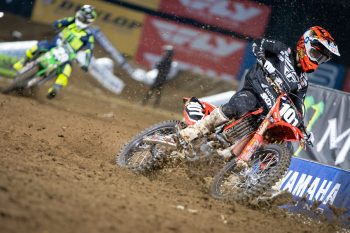 The New South Welshman rode strongly from the beginning of the day, qualifying in fifth before leading a number of laps in heat race two, winding up in fourth position.

“I felt better,” Clout admitted. “Testing has gone well, and working with Buddy Antunez has clearly helped. It was a positive step forward but we have a lot of work in front of us. I really hope I can stay and complete the championship.”

Clout sits eighth in the championship standings as the series heads to San Deigo this weekend, which was initially scheduled to be his last Supercross appearance before returning home to Australia for the MX Nationals.