Queenslander to remain aboard Husqvarna machinery in 2020. 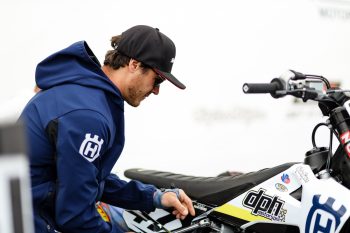 Reigning MX1 champion Todd Waters has put an end to speculation of a possible campaign in the Australian Off-Road Championship alongside the MX Nationals this season.

The number one has spent time riding enduro aboard his own Husqvarna FE 501 throughout the off-season, prompting rumours to circulate of the Queenslander taking on double-duties across the two disciplines.

Waters denies the rumour, simply stating it’s an alternative way to train in the summer months – an idea he’s drawn inspiration from the Europeans in the MXGP World Championship.

“That’s just a rumour,” Waters declared to MotoOnline.com.au in a recent interview. “I’ve obviously been riding off-road a bit – in Europe those guys like Stefan Everts ride off-road at Christmas time – just getting out on the bike and having some fun. It’s nothing really.”

The 29-year-old, who was part of the DPH Motorsport squad that went into liquidation late last year, has remained tight-lipped on the deal that will see him defend his premier class crown, however he has indicated he’ll remain aboard Husqvarna machinery.

“We’re just bringing it together,” he said. “We don’t have much to share at the moment. We’re just doing our thing behind closed doors. I’m pretty excited to come out at round one, we have some good competition with Ferris coming back, Gibbsy will be on point and Clouty has changed teams. But yeah, there’s not really much share, to tell you the truth.

“We’ve got some good people to race against, but in saying that, we’ve got a good team of people behind us this year. I’m on the same bike, so it’s straight off a championship-winning bike and program, so we’re excited to carry that on and better it.”

The opening round of the MX Nationals is scheduled to take place at Horsham on 4-5 April.