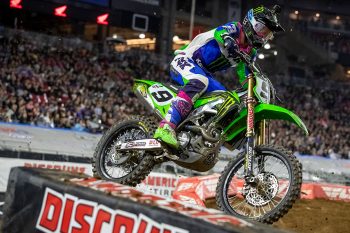 Fastest qualifier Adam Cianciarulo’s night at Glendale came to a crushing end on Saturday night, leaving him frustrated but uninjured following a costly crash in final three of the Triple Crown.

The Monster Energy Kawasaki 450SX rookie was fastest once again in qualifying for the fourth-straight week, however, 3-6-17 scores earned him eighth overall.

Following an error in final two, Cianciarulo’s chances of finishing on the podium ended when he crashed out of the final outing altogether in the whoops while in third position. He’s since confirmed no injuries were sustained.

“That was definitely not how we wanted to finish the night and, although this is part of racing, it’s always a tough pill to swallow,” Cianciarulo commented. “We kicked off the day qualifying fastest again and honestly, I was feeling good all day.

“I made some mistakes out there and that last one cost me. I’m sore and a bit frustrated, but I have a great team behind me who continue to remind me there are a lot more races left to go in this premier class. We’ll take the week to recuperate and look to come out strong in Oakland.”

The lone podium of Cianciarulo’s podium came at Anaheim 1’s opening round with a runner-up result, now currently ranked sixth in the Monster Energy Supercross standings following four of 17 rounds.