Consistent Forkner earns 250SX West win at the fourth round. Points leader Ken Roczen (Team Honda HRC) made an incredible pass around the outside of Tomac in the sand section, going onto then pass Osborne – who crashed in the path of the German ace.

Roczen got through unscathed to secure the lead, fending off a bid from Tomac to secure victory. Tomac was second ahead of rookie teammate Adam Cianciarulo (Monster Energy Kawasaki), followed by Stewart and Jason Anderson (Rockstar Energy Husqvarna Factory Racing).

Main event two was forced to be red-flagged after a nasty first crash involving Osborne and Justin Bogle (Rocky Mountain ATV/MC KTM), the latter being assisted off the circuit with the Alpinestars Medical Unit.

On the restart it was Roczen who shot out to the lead with reigning champion Webb in tow, but that was the last they saw of Roczen as he charged to a commanding win.

Webb struggled to maintain his position at the front, first being passed by Cianciarulo, who went down a lap later, then losing spots to Tomac, Anderson and Baggett – the trio finishing in that order with Webb in fifth.

Another red-flag was thrown in the opening stages of main event three, which came due to nasty crash for Chris Blose (Chaparral FXR Racing Honda) in the whoop section.

Roczen benefited from the restart for the second time, securing the hole-shot and storming away from the field to a dominant victory.

Tomac went down on the early lap, but able to rebound, while his teammate Cianciarulo crashed heavily in the whoops during the final moments.

At the chequered flag, Anderson was second over Tomac, Webb and Davalos. The top 10 was made up of Stewart, Barcia, Plessinger, Brayton and Hill. Roczen boosted his points by taking the overall, joined on the podium by Tomac and Anderson. Australia’s Chad Reed (Mountain Motorsports Honda) was 20th overall. 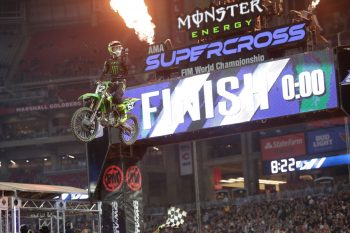 Main event one saw Geico Honda’s Christian Craig pushed off the start, while it was Forkner and JGRMX Yoshimura Suzuki Racing’s Alex Martin who led the field.

It was a dramatic start to main event two as Cooper surged to an amazing hole-shot, leading the field for the opening stages before suffering an untimely crash.

It allowed Drake to take control of the field, while at the same time Craig was ruled out of the race. Drake led for a number of laps, but was ultimately passed by Forkner, who went onto secure victory.

Reigning champion Ferrandis moved to second as he crossed the line ahead of Drake, while it was Mosiman and Hayes who completed the top five. Hartranft was sixth ahead of Oldenburg, Martin, Cooper and Jay Wilson (Yamaha).

Martin Castelo (JMC Motorsports Racing) snatched a surprise hole-shot in the final encounter before being quickly overcome by Cooper, who put his earlier mistakes behind him to claim victory.

The race was mainly uneventful as Ferrandis and Forkner locked out the top three, finishing ahead of Hartranft and Hayes. Mosiman was sixth followed by Oldenburg, Clout, Martin and Killian Auberson (Gas Monkey AJE Motorsports).

Overall it was Forkner from Ferrandis and Mosiman, who landed on the podium for the first time this year. Australians Luke Clout (Penrite Honda Racing), Jay Wilson (Yamaha) and Aaron Tanti (Yamaha) finished in positions 10, 15 and 16. Cooper still leads the standings as the series heads to Oakland in California next weekend. 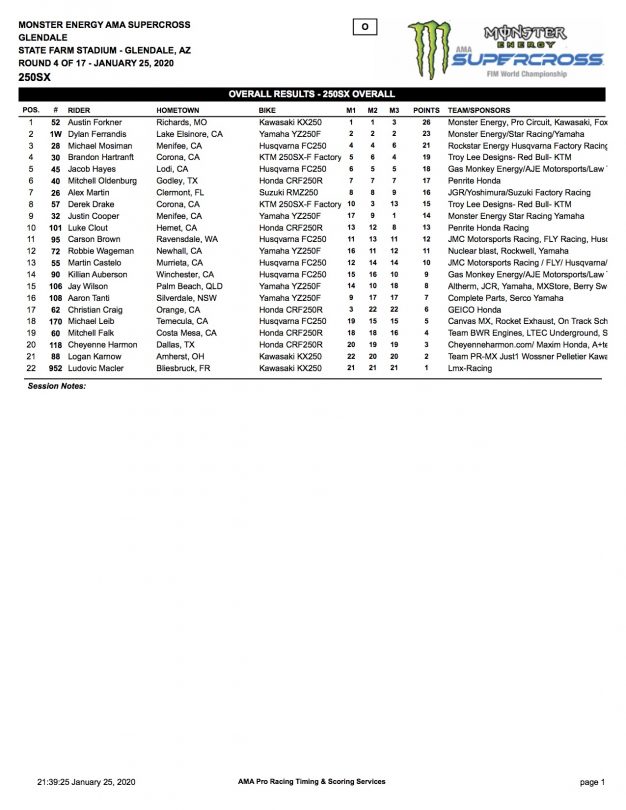