Limited bike time for AORC champion in the lead up to round one. 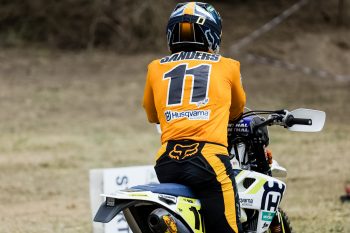 Reigning ISDE and AORC champion Daniel Sanders has revealed a wrist injury sustained last month initially went undetected, the Victorian now forced to endure limited bike time in the lead up to Toowoomba’s opening round of the domestic series.

Sanders crashed while play riding on his own supercross track last December, suffering a dislocated finger before experiencing wrist pain and swelling.

The number 11 underwent scans upon returning from holiday, where the radiology report suggested he was cleared of injury – not satisfied with the finding, Sanders sought out a surgeon to inspect the x-rays, where a crack in his right wrist was immediately discovered.

“I dislocated my finger straight away, but I got up and everything else was fine,” Sanders explained to MotoOnline.com.au. “I had to put the finger back in, and then that night the wrist started to become a problem when I was out throwing hay bales with my brother and my dad.

“I flew to Thailand the next day for 10 days – I took a wrist brace over in case something was wrong. I didn’t think it was anything major because I wasn’t in a heap of pain, but the swelling was there.

“I came back a few days before Christmas and booked in an x-ray, the notes said everything was all clear, so I was a bit confused with that and so was my local GP. I saw a surgeon to double-check the x-ray, and he saw the crack straight away. I had already been riding, and it’s around the four-week mark.

“I’ll be giving it a few weeks – the surgeon said to six to eight weeks [recovery]. I’ll chase up another x-ray this week to see how it’s healing, but yeah, it’s just limited time on the bike.”

Sanders indicated he’ll continue with the Husqvarna Enduro Racing Team in 2020, and is adamant he’ll be fit for the AORC opener on 22-23 February.