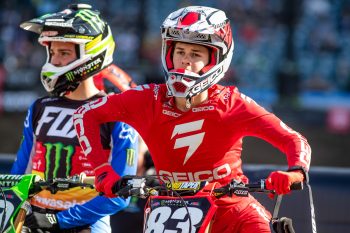 Australian Jett Lawrence has indicated a broken collarbone is the injury he suffered during the dying moments of a dramatic Anaheim 2, marking the third round of the Monster Energy Supercross.

The Geico Honda rider attempted to re-pass the Frenchman ahead of the whoop section on the final lap, however a mistake resulted in crashing heavily on the exit and into the face of the next obstacle.

Lawrence initially laid motionless before being assisted off the circuit by the Alpinestar medical unit, revealing today that a broken collarbone is the damage from what was a thrilling ride for the youthful talent.

“I’ll never settle for second and will always leave everything out on the track,” Lawrence declared in a statement. “Lucky to only have a broken collarbone – we will get it all sorted tomorrow and get back to the races ASAP. Thanks for all the support and messages.”

Lawrence was still credited ninth after lapping up to that position, while it’s unclear how long the collarbone injury will keep him on the sidelines.