Reigning champion apologises for incident with the Geico Honda rider. 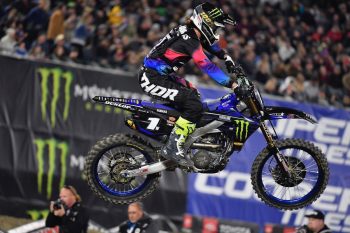 Winner of Anaheim 2′ 250SX West main event Dylan Ferrandis has been put on a 12-month probation after clashing with Christian Craig (Geico Honda) during Saturday night’s third round of Monster Energy Supercross.

The Monster Energy Star Yamaha Racing rider made an aggressive pass on Craig as they battled for position, resulting in the pair both crashing in the process.

The Frenchman rebounded from the incident as Craig hobbled to his damaged CRF250R, later charging into the lead throughout the closing stages to collect a dramatic victory.

The reigning champion, who will be fined if he violates the rulebook during the probation period, apologised for the incident, however maintains there was no intent to take out the number 62.

“We approached the middle of the race – or a quarter – and I tried a move on the inside of him,” Ferrandis explained. “From my point of view, it wasn’t that crazy, but obviously we all saw what happened.

“I came with a lot of speed from the finish line, made a big scrub on the inside and wanted to pass on the inside – he just didn’t hear me or see me. From what I see on the picture, I kind of slide and I think I crash before we even touch – I just slid my two wheels and crashed, and I made him crash obviously.

“I apologise for that because I never wanted to make him crash. I’ve been in the US for almost four years, so I hope people don’t get too mad about it.”