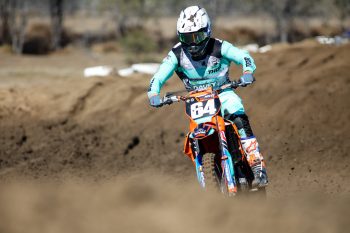 Dylan Wills insists he has ‘more to give’ after recently announcing he’ll sit out the upcoming MX Nationals series in favour of undergoing knee surgery.

The popular New South Welshman had been battling an ACL injury for 18 months, prompting him to undergo surgery and repair the damage in hopes of prolonging his career.

Wills, 24, is anticipating a six-month recovery period before returning to the bike and has full intentions of making an assault at the 2020 Australian Supercross Championship.

“The weekend after I won that national at Raymond Terrace in 2018, I had a small little crash and completely ruptured my ACL,” Wills explained to MotoOnline.com.au. “I saw a few doctors and specialists, and we came up with the idea to try and race without it.

“I was putting in a lot of work to try and strengthen everything to make up for the fact I didn’t have an ACL – I was just continuing to dislocate it, and that just went on for too long. I kept thinking maybe it would get stronger, and it got the point 18 months down the track where I thought if I keep going this way, my career is going to be over.

“I really don’t want that – I believe I’ve got a lot more to give, and more of those Raymond Terrace-style rides to do before I even think about packing it up.”

Wills’ decision to skip this year’s MX Nationals comes at the same time his team from 2019, Davey Motorsports KTM, revealed it would also sit out the series with the possibility of returning for supercross. The team has played a significant role in ensuring a large number of riders could make the races over the year.