Victorian-based operation to announce team in the coming weeks. 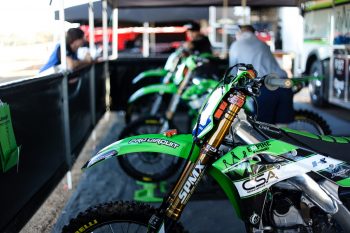 Empire Motorsport will enter its second year in partnership with Kawasaki Motors Australia after the manufacturer recommitted to supporting the Victorian-based team for the 2020 season.

Empire Kawasaki initially fielded a two-rider team in 2019 with Dylan Long and Deakin Hellier in the MX Nationals, while that later expanded to a three-rider effort with the inclusion of Lawson Bopping followed American Bradley Taft, who contested the Australian Supercross Championship.

“Empire Motorsports are very excited to be teaming up with Kawasaki Australia again for both motocross and supercross in 2020,” said team manager Tyson Cherry.

“The 2019 MX Nationals season was a great start to the relationship with Kawasaki Australia and we are looking forward to pushing to the top in 2020.

“[The] 2020 supercross season is looking promising after very positive rides and places in 2019. Exciting times ahead for both Empire Motorsports and Kawasaki Australia. We are really looking forward to the season onboard the Kawasaki KX250 and KX450.”

Empire Kawasaki is anticipated to reveal its line-up for 2020 in the coming weeks, where it’s likely Jayden Rykers will be confirmed as the MX1 rider following a breakout rookie campaign in the premier category last year.