Australian teenager salvages fifth at the second round of Supercross. 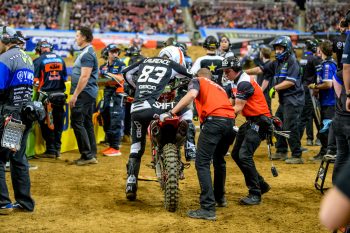 The youthful Australian, who overcame a heavy fall in his heat after colliding mid-air with Taiki Koga (Kawasaki), was challenging eventual winner Austin Forkner (Monster Energy Pro Circuit Kawasaki) for the lead before he clipped a tough-block with just minutes to spare in the 18-lap main.

It bent his rear brake lever, causing it to lock-on and prompting the Geico Honda rider to swiftly visit the mechanics’ area, demoting him down the order for a finish of fifth.

“Weekend was up and down,” said Lawrence. “Qualified good with fifth fastest, but the heat race was a complete disaster ride like a complete rookie! Thankfully I pulled it together somewhat in the main.

“I rode a good race and was ready to challenge for the win with three mins left in the main before I clipped a tough block which damaged my rear brake and locked it on forcing me to come into the pits.

“Kind of a bummer to have that happen, but it’s okay because I learnt a lot and am ready to battle at the front this weekend in Anaheim.”

Lawrence is now ranked sixth in the championship standings as Monster Energy Supercross heads to Angel Stadium in Anaheim this weekend.