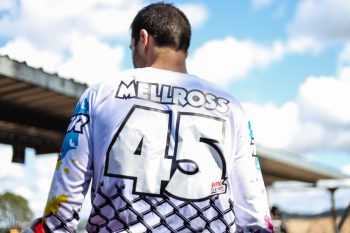 The popular New South Welshman has been sidelined since the conclusion of 2019 MX Nationals series in August, where he raced with a torn ACL and meniscus before immediately undergoing surgery to repair the damage.

Signing a multi-year deal with the powerhouse CDR Yamaha outfit while recovering from the injury, Mellross has since received clearance to recommence riding next month.

Despite the transition to Yamaha and a lengthy period off the bike, the number 45 is confident two months of preparation prior to Horsham’s MX Nationals opener will have at him at 100 percent for the beginning of his MX1 title bid.

“I’ve been up in Brisbane seeing my doctor, and he’s extremely happy with how the recovery has gone,” Mellross explained to MotoOnline.com.au. “He’s really confident in my knee – he did a few tests and seems to think it’s strong, and in my terms, it’s ready to shake and bake.

“He’s really happy with it, and he did say to wait to 1 February because that will be five and half months from surgery. The ACL can take six months and even up to 12 months to recover, and with the season starting in April, I think it’s a good plan to start in February. It gives me a solid 10 weeks of training on the bike.

“My knee has been going great – I think from the start I really underestimated how the recovery was going to go with the ACL and meniscus. I had a great surgeon and a great group of therapists around me, and access to a lot of technology to help with my recovery.

“I’ve pretty much been doing stuff every single day for the past four and half months – most therapy sessions are an hour up to two or three hours a day. I’m really trying to crush it, and everything’s been well – it’s super strong right now, I’ve been cycling a lot and I’ve been in the gym pretty much every day. I couldn’t really be happier, and my doctor and therapist seem to have the exact same opinion.”

Mellross will join Kirk Gibbs at CDR Yamaha Monster Energy in the 2020 MX Nationals, which kicks off on 4-5 April at Horsham in Victoria.