New South Welshman discusses recovery and the season ahead.

Recently signing a multi-year deal with CDR Yamaha Monster Energy, Hayden Mellross is just weeks away from returning to riding after undergoing knee surgery last year. We recently caught up with the popular New South Welshman for this latest edition of Conversation. How has the recovery been going with your knee?

My knee has been going great – I think from the start I really underestimated how the recovery was going to go with the ACL and meniscus. I had a great surgeon and a great group of therapists around me, and access to a lot of technology to help with my recovery. I’ve pretty much been doing stuff every single day for the past four and half months – most therapy sessions are an hour up to two or three hours a day. I’m really trying to crush it, and everything’s been well – it’s super strong right now, I’ve been cycling a lot and I’ve been in the gym pretty much every day. I couldn’t really be happier, and my doctor and therapist seem to have the exact same opinion.

When is the plan to recommence riding?

I’ve been up in Brisbane seeing my doctor, and he’s extremely happy with how the recovery has gone. He’s really confident in my knee – he did a few tests and seems to think it’s strong, and in my terms, it’s ready to shake and bake. He’s really happy with it, and he did say to wait to 1 February because that will be five and half months from surgery. The ACL can take six months and even up to 12 months to recover, and with the season starting in April, I think it’s a good plan to start in February. It gives me a solid 10 weeks of training on the bike. 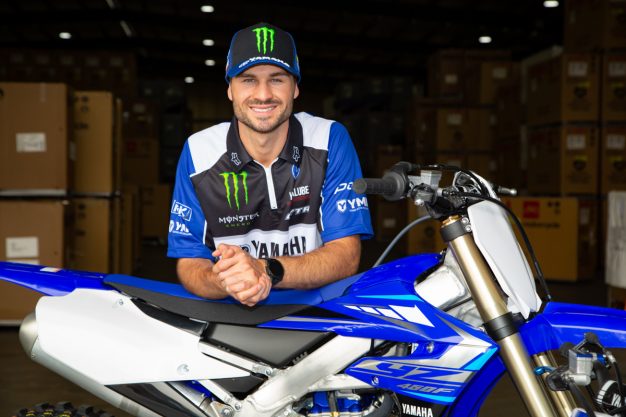 Considering the recovery and the fact you’re transitioning to Yamaha, do you think it will be a case of playing catch up throughout the pre-season or are you confident you’ll be 100 percent by round one?

What’s the initial feeling or vibe been with CDR Yamaha Monster Energy since signing a multi-year deal?

The feeling has been great! I’ve had a few phone calls back and forth with Dacka, and he’s been exceptionally helpful. The whole team has been great – I’ve had the pleasure of going down to Torquay late last year and formally meeting everyone, looking at the shop and looking at the set-up. The set-up and structure they have down there didn’t surprise me – I knew it was going to be legit, and it was. To see the headquarters and how professional everything is set-up was amazing, and they’ve welcomed me with open arms. They’ve bent over backwards for me, so if that’s a sign of how we’re going at the start of two years, I’m really confident and excited for the results we can achieve.

This year the MX Nationals has been reduced to six weekends of racing with nine rounds, what’s your take on it?

I guess I have mixed opinions, but I’m not really someone who wants to add in their two cents. At the end of the day, I really don’t know what WEM has had to go through to promote the national series. I’m not a fan of double-headers – it’s a lot of racing [over a weekend] and it’s extremely tough. One day is hard enough, let alone two. I understand why they’re doing it – cutting costs and helping privateers to compete. But, being able to broaden our reach with fans by visiting new tracks and venues, I think it’s nice to go to new locations and different locations rather than the double-headers. I see both sides of it. I’ve got a schedule and I have to race to it, and whether I like it or not, my goal each and every weekend will be the same, and that’s to go out and win. I’m confident in the team and myself, and I’m sure we’ll give it a red-hot crack.