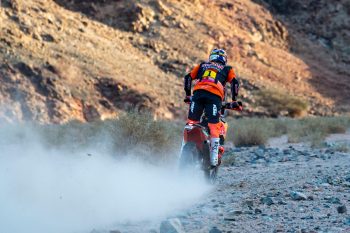 Defending Dakar Rally champion Toby Price is preserving himself and his Red Bull KTM Factory Racing 450 as he maintains his bid for a third crown following stage four of the prestigious event.

The Australian experienced another positive day during stage four after losing significant time on day two, completing the route in sixth for an improved overall ranking of fourth.

“It’s been a good solid day’s riding for me, I made a few mistakes but nothing major,” Price explained. I don’t want to bash myself up or bend the bike so I’ve just tried to ride consistently and stay in touch with the other guys. We’re still in contention and there’s still a long way to go.”

Stage five will take riders from Al-‘Ula to Ha’il – the 564-kilometre route includes a timed special of 353 kilometres that will cover a mixture of dirt and rocks before opening out into the dunes for the latter half of the stage.