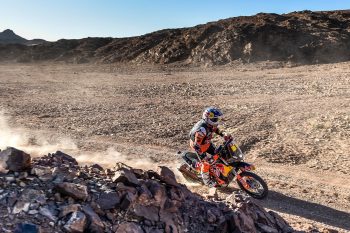 Red Bull KTM Factory Racing’s Toby Price is hoping to reduce the gap to the leaders on day three of the 2020 Dakar Rally after losing considerable time during stage two.

The defending champion claimed victory on day one, prompting him to start first on the second day of proceedings with a challenging route ahead.

As a result, he was demoted down the order as anticipated, finishing the stage in 17th for an overall ranking of ninth – 7m34s down on lead and teammate Sam Sunderland (Red Bull KTM Factory Racing).

“Today was always going to be tough, leading out from the start without having had much time to read the road book,” Price explained.

“The stage went okay, I lost some time to the others but the most important thing is I looked after my bike and the tyres so should be in good shape to close down on the leaders again tomorrow. There’s still a long, long way to go, but the bike is working great, things are looking good and I’m happy.”

Stage three will see riders complete a looped course starting and finishing at the city of Neom. Of the 504 kilometres covered, 427 will be a timed special.