Youthful rookie lands top 10 result at the opening round of Supercross. 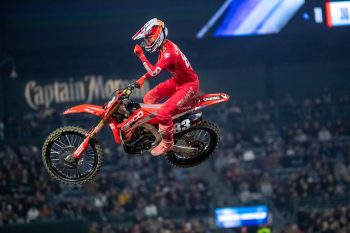 The 16-year-old Australian battled the illness as landed a heat race finish of sixth, granting him a direct transfer spot to the main event.

An inability to consume food and liquids throughout the day eventually caught up with Lawrence in the 17-lap final, where he admits fatigue set in halfway through before salvaging a respectable ninth place result.

“Well, Friday started off with getting food poisoning from a Chick-fil-A sandwich!” said Lawrence. “I ended up waking up at one in the morning throwing up and having diarrhea and really bad stomach cramps so I couldn’t make it to press day.

“Saturday morning I was feeling a little bit better but I didn’t get very good sleep. I was pretty tired plus couldn’t eat anything – just a rice cracker and some sips of water so my energy was pretty low.

The Monster Energy Supercross series visits St. Louis in Missouri this Saturday night for round two of the 17-stop championship.