AMA Supercross races on the cards for Wightman 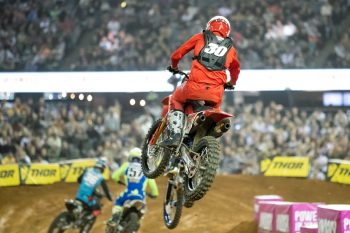 Privateer Joel Wightman has revealed plans to race the opening rounds of the 2020 Monster Energy AMA Supercross Championship in the premier 450SX category.

Wightman will pilot Honda machinery at the first five rounds, although St Louis’ second stop on the calendar isn’t yet a certainty for the New South Welshman.

The Australian Supercross Championship regular has just come off a stellar 2019 campaign, where he finished with a rewarding P7 series ranking in the SX1 division.

“I’m going to race in the 450 class and do the first five rounds, maybe six, but I’m not locked in for St Louis round two yet,” Wightman explained to MotoOnline.com.au.

“The travel and the way I’m doing it might not allow me to do that one. It’s something I’ve wanted to do for a long time, and I’m basically going to get it done next year.

“You like to make a few comparisons where you can when the US guys come over and with Aussie guys that have gone over there and raced, but I’m not putting too much pressure on myself with any results. I’m basically having a go and trying to make the night show – if I can do that and have a blast, then I’ll be stoked.”