Racer comments from the fifth round of the Australian Supercross Championship.

A selection of riders detail the 2019 Monster Energy AUS-X Open Melbourne, marking round five of the 2019 Australian Supercross Championship. Team and privateer competitors can submit comments to [email protected] by Wednesday afternoon after events for inclusion in the post-event Quotebook feature. Luke Clout (CDR Yamaha Monster Energy) – Seventh overall:
Look, it’s a bit of a disappointing way to finish the championship but overall, I still see it as a very positive series for me and one that I made gains on as a rider. Myself and the team put in a lot of work both in the lead-up and during the championship and it was rewarded with good results all the way through and a second championship behind Justin is still something both the team and myself can be very proud of. Thank you to Craig and everyone on the CDR Yamaha Monster Energy Team as well as my brother Aaron for the amazing job they do. And to race in this venue tonight, in front of so many people is such a huge moment for our sport. Walking out for race one and seeing the crowd and venue gave me chills.

Dan Reardon (CDR Yamaha Monster Energy) – Sixth overall:
I made things difficult for myself when I crashed in the heat race. Instead of having an early pick of the start gate with a direct transfer spot, I had 17th pick of the gate and as a result, wasn’t in a good position in the first turn on every start. I would love to have done better here tonight as it was a big stage for our sport in a venue like this and with the biggest crowd we have had for supercross, but still happy to finish third in the championship and be racing at this level. Last year I finished the season with an injury in Auckland that took months to rehab. It took a lot of work to come back and get full strength back in my foot and ankle, but I am glad I did it as I still love racing supercross. It was also great to hook up with the CDR Yamaha Monster Energy Team again and re-ignite a successful working relationship. We won in 2015 and here we are four years later still going for championships.

Josh Hill (CDR Yamaha Monster Energy) – Third overall:
I had such a great time here in Australia and can’t thank everyone from Monster and Yamaha for their support and enthusiasm in having my race down here. Everything about this trip has been so much fun and if the opportunity comes up again I would love to do it as my time here as been amazing. It was also good to get on the podium at the biggest race of the season and reward the CDR Yamaha Monster Energy team. We have been close at the other two rounds and I was desperate to give them some decent results for everything they have done. I hope to come back next year and do a full supercross season as I can see the sport is growing here. I can see why Justin does it every year, you Aussie people are cool, so hopefully we can work out a deal that will enable me to do it again as I think I have more to give in racing and enjoy my time here so much.

Richie Evans (Yamalube Yamaha Racing) – Eighth overall:
Sometimes I look at who is alongside me on the start line and think it’s pretty amazing that I am on the same track as them. I started next to Jason Anderson in all six main events in Auckland and Melbourne – the guy was the 2018 world champion, and I’m just a dude riding a dirt bike from Cairns. I think he must be over me as I got a few starts on him as well. But it’s been a good supercross series for me. I came in injured at round one, got a top five in Adelaide, had a couple of tough races in Wollongong and Auckland before finishing strongly here in Melbourne. The team have been great and having Michael work with me has been good as he has so much experience. Thank you to everyone on the team and I have had a great time racing supercross.

Justin Brayton (Penrite Honda Racing) – First overall:
This is a triumphant and special victory for everyone involved. Six weeks ago I didn’t know if I was going to be able to ride. I had a small crash following round two, but it caused a large amount of damage – I ended up breaking four ribs and the resulting pain interrupted my program. I knew it was going to be really tough but I had to just get out there to rounds three and four and score as many points as possible so that I would be in the championship hunt going into the final round. I have no words! All I can say thank you to everyone who made it possible – to Honda Australia, American Honda and Penrite. Everyone involved who goes above and beyond for my family, and I am thankful for the continued support. Also to the Australian fans, thank you again for welcoming me into your country. There is some bright talent coming through and if I return next year, I know it will be an even stronger field.

Brett Metcalfe (Penrite Honda Racing) – Fourth overall:
I should of, would of, could of – it’s been one of those years. We were in positions to be on the podium in rounds one and two and I crashed. The podium in New Zealand was long overdue – we weren’t miles off this year, but those precious tenths were hard for me to find. I know what I need to work on for next year. Taking third in the OceaniacChampionship was nice, we did make some improvements but I know I need to be better.

Lawson Bopping (Empire Kawasaki) – 18th overall:
I’m happy just to be able to complete the championship, because it’s been a battle through my illness and I’m grateful that the Empire Kawasaki team has stuck behind me the whole way. It wasn’t the end to the season we were hoping for obviously, but it was an unreal event and I enjoyed it a lot.

Dylan Long (Empire Kawasaki) – Ninth overall:
To take a top five result in the championship on the KX450 is really rewarding for myself and the Empire Kawasaki team. We’ve worked hard all season and have had some strong finishes along the way – tonight was definitely stacked with some of the best riders in the world! 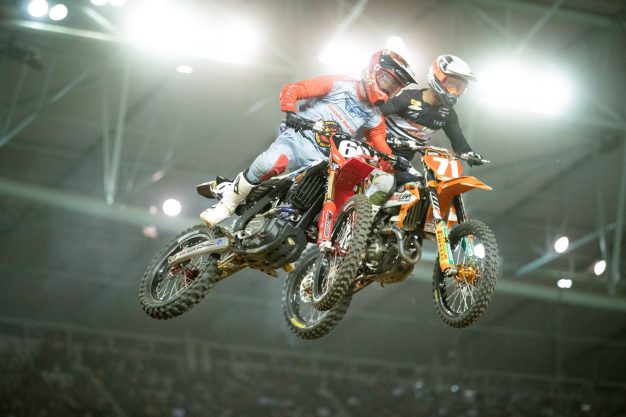 Jay Wilson (Yamalube Yamaha Racing) – Third overall:
Tonight my mentality was that I had nothing to lose. I was fifth coming into the final round and even if I had a shocker, it wouldn’t have done much for the overall result, so I just laid it all on the line and see what happened. I didn’t get great starts all night and that was my fault, my reaction time at the gate was terrible but I managed to make some passes only to get near the front but run out of time. But, I feel pretty good with how I raced tonight and just wished I had of taken that mentality in from round one. The team did a great job as always and the bike was perfect. The Yamalube Yamaha Racing team put in a big effort and it was frustrating not to be able to get them on the podium until now in this series. Thanks to my mechanic, Mike Ward, his dedication and passion is unrivalled and while we didn’t get the championship back, we gave it a good shake.

Rhys Budd (Penrite Pirelli CRF Honda Racing) – Eighth overall:
The track started out great in practice but as the night went on, the track got slicker and slicker. By the time we got to the three SX2 finals, the track was super-tricky, but overall I had a great night and posted my best result for the season. I was super-pumped to get a top five in the third and final race. The back-to-back race format meant the pressure was on the whole time and I really have to say thanks to everyone on the Penrite Pirelli CRF Honda Racing team for making the result possible. It’s been a fun season with the team and I am really going to miss all the crew next year.

Kyle Webster (Penrite Pirelli CRF Honda Racing) – 15th overall
It wasn’t a great night for me. I just didn’t get it together and I had a few small tip-overs and that was pretty much that. It wasn’t the way I wanted our last race to be, but I’ve had such limited time on the bike this supercross season that I feel like it has got the better of me during the races. After four awesome years with Mark and the Penrite Pirelli CRF Honda Racing team, it was definitely sad to know it was an end of an era, but maybe someday in the future we can do it again.

Bradley Taft (Empire Kawasaki) – Ninth overall:
Tonight was reasonably consistent for me, although for sure we wanted to finish higher. We’ve shown potential through the championship and I’ve had the speed, it’s just not come together when it counts. I’ve had a good time with Empire Kawasaki and thank everybody for the opportunity down here.

Regan Duffy (Raceline KTM Thor) – Fifth overall:
Tonight was intense for me, the track here at Marvel Stadium was unreal. I had to figure out a few rhythm sections after the day’s timed sessions, but we worked it out for the main events and it made a big difference come race time. I had some close calls out there tonight, the racing was incredible to be a part of and I had a great time. I can’t thank the team and everyone in my corner enough, 2019 has been a solid start to my professional career.

Josh Osby (Raceline KTM Thor) – Seventh overall:
Tonight was one of the hardest nights of my career. I put myself in good positions like I have all season, but unfortunately it just didn’t work out. It seemed like nothing went my way from the beginning of the heat race on and although we tried, it wasn’t meant to be this time around. I want to thank the entire team, we came so close and they gave me everything I needed to get the job done. But that’s racing and hopefully I’ll be back for redemption next year.

Chris Blose (Penrite Honda Racing) – Second overall:
Osby had been riding well but four points were achievable. I knew my teammate would be respectable and Jett Lawrence raced mindful that championships were on the line. I just had to race as hard as I could and I had to make the first two finals count. The last of three finals I rode conservatively as I knew where I had to finish. These are the biggest results in my career, purely because they are championships. I have come close in America, but for whatever reasons I haven’t taken out the overalls before. To win in front of my son and wife is priceless. I can’t thank everyone enough.

Mitchell Oldenburg – (Penrite Honda Racing) – First overall:
I am pumped I finished with a win. We won two rounds, but the mistakes in the other rounds cost me. I learned a lot during this championship and I am looking forward to putting it all into practice next year in America.