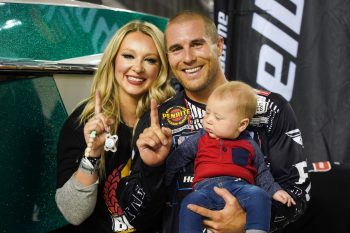 The title, which marked a Penrite Honda Racing whitewash in the series as Justin Brayton earned his fourt-straight SX1 championship, comes as a great reward for the AMA Supercross regular following a trying start to the season.

“This rates up there probably in the top one,” Blose declared to MotoOnline.com.au. “I came over here in ’17 and I won the AUS-X Open, I was supposed to come last year to ride for Yarrive [Konsky] and I ended up getting hurt – this year we made it happen.

“It feels really good to get the championship, that was our overall goal all year. It kind of started out a little rough, but you know what, we made it happen.

“We fought at the last few races, and tonight was an awesome night – I went second behind my teammate Mitchell [Oldenburg] for the first main event, I took the joker lane in the second main event and ended up winning that.

“I knew where I was mathematically, and seeing [Josh] Osby and something happening to him, so I just let those guys have it – we won the war, not the battle. I played it smart in that last main event.”

Blose is understood to be piloting Honda machinery in next year’s Monster Energy AMA Supercross Championship.